If we could ask What are you? To a pearl, she could surely answer us:

“I come from the clean sea and my birth was not spontaneous; I have been carefully received in the cavity and body of an oyster, where, over the time, I have been forming and cultivating myself with the shine and glow of layers of mother-of-pearl, acquiring as any organic and living being the unique difference, and imperfection Characterizes nature.
Our species, individually or properly combined, complements and helps to enhance female beauty, bringing distinction, elegance and serenity at all times and on all occasions.”

Pearls are the gemstones with an organic origin that are most used in jewelry.

We call pearl any concretion, pearly or otherwise, found in various species of mollusks, marine or freshwater. Its origin can be natural or cultivated.

How to value a pearl

In Pearls Concept we believe that the beauty of a pearl is linked to the emotion that each one feels when seeing it.

It is the most important feature of cultured pearl. It consists of an iridescent sheen.

It is judged by the intensity of the light that the surface of the Pearl reflects. The brightness depends on the fineness, the uniformity and the thickness of the layers of mother-of-pearl.

A pearl will rarely have an absolutely smooth surface. It will have higher value those that have the least number of imperfections.

It is a decisive factor. A slight bite on the surface can devalue its price.

The quality of a pearl is determined, among other things, by its shape.

The perfectly spherical ones are the rarest and represent only a small part of the total production. They are followed by the semi-rounds (off-round), semi-baroque and baroque. The special shapes, such as drop pearls, when they have perfect shapes, are highly quoted.

They are from a particular category witch is characterized by the presence of concentric circles at the top of the pearl. It has the possibility of appearing in many different forms. Those differents characteristics give the circle pearls a very attractive individual beauty.

It is a cultured pearl without a solid nucleus. Keshi is a Japanese word that literally means "poppy seed" and is often used to describe small pearls. Keshi pearls are a highly demanded type thanks to their beautiful and intense shine and their freestyle forms. Their size varies from 2mm to 8mm, but sometimes they can be found in larger sizes.

Cultured pearls has awide range of colours. They are usually classified by colors, with different tones.

Colour, like form, is a very personal choice and the popularity of a certain tone influences the value of a pearl. The color white with pink tone is the most valuable.

The size of cultured pearls is determined by their diameter, measured in millimeters.

The diameter Akoya pearls ranges from 2 to 10 mm, those of Tahiti pearls can reach up to 18 mm, the pearls of the South Seas can measure up to 22 mm.

Between two pearls of same characteristics, the biggest one has more value..

Beginning of the formation of the pearls

The creation of pearls is a fascinating process that requires a lot of time and dedication. The bed of oysters is a natural habitat that must be meticulously fed and prepared before a pearl can be conceived.

In 1893, after years of arduous efforts, Kokichi Mikimoto managed to duplicate this natural process by implanting a nucleus. The method he developed is still used today by pearl producers.

After that, a cultured pearl begins its life when a foreign object is introduced into an oyster and can not be expelled from it.

To protect its smooth body from the intruder, the cells inside the oyster secrete a smooth, hard substance, called nacre, around the irritating object.

After two or three years of depositing nacre layers around the irritating object, if the oyster survives and the conditions are correct, the cultured pearl is formed.

Most of the pearls that currently exist in the international market are cultured pearls, that is, beads obtained by inserting a spherical shell of mother-of-pearl (made with the shell of another mollusc) into the pearly sack of a Three-year oyster.

To extend the life and conserve all the beauty of a pearl, follow these steps:

a) Keep them in its case:

Cultured pearls are relatively soft compared to other gemstones. So it is important to keep the pearls isolated from the rest of jewelry to ensure that they are preserved bright and beautiful over time.

b) Have a suitable case:

The cases with interiors in silk, velvet or cotton are the most suitable for their conservation, as they treat the pearl with softness in addition to allowing the perspiration.

Cosmetics, perfumes and hair lacquers contain chemicals that can damage the luster of the pearl over time. Even the body’s natural fats as well as sweat can also damage the pearl.

It is convenient to wear them after applying the makeup or perfume. After using them should be wiped with a damp cloth to keep them free of harmful residues of these products. Periodically, the beads should be washed with a mild soap.

Both dryness and extreme humidity are detrimental to the beads. Fresh water must be used to clean them, thus avoiding dehydration and loss of brightness. A quick cleaning with a little water and soap, with neutral pH, will aid in its degreasing; The rinse with fresh water and dried with a soft cloth, will help to recover the luster.

The most important of all cares, so that the pearls retain all their beauty must be worn regularly. The very moisture of the skin helps to retain its luster. 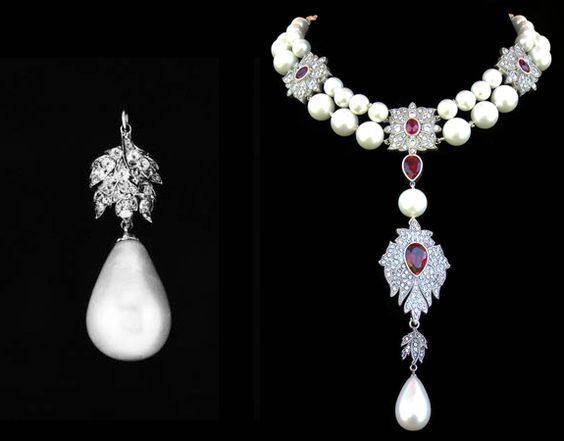 he history of this famous pearl begins in 1570 when, after appearing in waters of Gulf of Panama, it was auctioned in the House of the Indies of Seville. Felipe II paid for her about nine thousand ducats and was worn by several Spanish queens, such as Isabel Clara Eugenia, Margarita de Austria, Isabel de Borbón and María Luisa de Orleans, some of them portrayed by Velázquez with the jewel. “La Peregrina” remained in the Spanish Crown until Joseph I Bonaparte, the brother of Napoleon who ruled Spain during the French occupation, fled the country with the famous pearl.

The jewel changed ownership again and passed into English hands when the descendants of Joseph Bonaparte sold it to the Marquis of Abercorn, in whose hands remained until the early twentieth century. In 1914 the Abercorn family sold it to a London jewelry store, which offered King Alfonso XIII the opportunity to buy it, but the Spanish monarch, worried about the imminent world war, declined the offer and “La Peregrina” was bought by an anonymous American billionaire .

Richard Burton bought it in 1967 for $ 37,000 as a gift to his beloved Elizabeth Taylor on his 37th birthday. In 2011 it was auctioned again. The auction of the Peregrina and the remaining jewels of Taylor took place on December 13, 2011; The pearl reached 9 million euros. 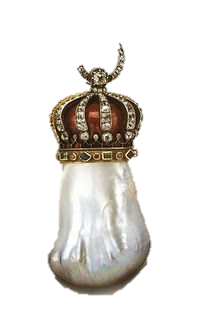 It is a pearl of the river, freshwater and is a real giant. It weighs 84 grams, something like 450 carats, and measures 5 centimeters long by 12 centimeters in diameter at its widest point and 9 1/2 centimeters at its narrowest point. It is shaped like a thimble and is pure white at the narrowest end and turns greenish bronze color on the wide side.

The legendary pink pearl is an Akoya pearl from Western Australia. It was a perfectly round pearl and a deep pink. Supposedly several people have died while they were in possession of the gem.There is a curse attached to it, as well as the Hope diamond.The last owner of the pearl the rosy Abraham Dayis died in Koombana on an Australian ship that sank in a cyclone.The remains of the ship were never found and it is said that the pearl was on board,

Some people claim that it never existed.

The largest pearl in the world is called Arco Valley and is in the royal palace of Abu Dhabi, in the United Arab Emirates. It is the largest on the market, it has belonged to Chinese emperors, Persian kings, the grandson of Genghis Khan and, supposedly, to Marco Polo. It is 800 years old.

It measures 7.87 centimeters (3.1 inches) in length and 575 carats and bears the name of a former owner of the family dynasty of the Valley of the Arc in Austria, is white with a slight bluish tone, and pink and cream tones in its Sides.

It has been pierced three times: so that it could be coupled with other jewels in the tiara of an unknown woman, to accompany a mandarin costume of ceremonies and to adjust to a crown or turban decorated with precious stones owned by a Persian king.

Court documents show that the pearl was owned by Kublai Khan, emperor of China in the thirteenth century and grandson of Genghis Khan.

It is one of the most unusual natural pearls of Polynesian origin and most likely the product of an oyster “Pinctada Margaritifera”, Drexel is considered as one of the most beautiful and rare natural pearls that are currently in existence due to Mainly to its fully symmetrical elongated and thin tear shape, its great smoothness, its gray color with pink highlights and an almost perfect luster, is in fact one of the wonders of nature when it comes to a naturally produced pearl. It has a weight of 33.8 qts. 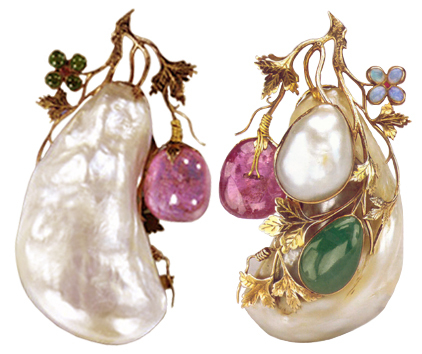 It is in fact a conventional pearl, but that is, the largest among the largest natural pearls that exist, has a weight of 600 qts., And a data that comes from the late sixteenth and early seventeenth century.

As its name suggests is an Asian pearl and is thought to be originally from the Persian Gulf, the first to possess it was the Mughal emperor Shah Jahan (1628-1658), the same one who built the most famous symbol of India, the Taj Majal .

The shape of the pearl of Asia, baroque type, is quite unusual to judge by the available images of it would say that its shape is similar to that of a bean but has a brilliant white pearly white with silver visions and whose brilliance has been maintained Unscathed despite the over 400 years it has of age, as most of the great famous pearls is likely to come from an oyster “Pinctada Máxima”.

When the last owner of the great pearl, Emperor Chien-lung, the fourth emperor of the Qing dynasty of China and who ruled the empire for 60 years died, as it corresponded to the tradition was buried with the Pearl of Asia, which had been Its most precious jewel and a symbol of good luck and fortune.